As with the first novel in the series (Casting Demons Into Swine), the crisis that entwines Dr. Cromarty in Prometheus Scorned is based on a true story from the same county where I practiced during the 1980s—although being fiction, some of the facts were muddled with imagination. During the early hours of a Sunday in March of 1992, Darvin Ray Peachey, whose grandfather was an Amish bishop—but raised ‘English’ by his parents—torched seven Amish barns and a schoolhouse within a 2-hour spree. Six of the barns were destroyed and scores of dairy cattle and horses died. Two dozen fire companies from four counties answered the call to the mayhem. Mr. Peachey plead guilty and was sentenced to ten years in federal court two years later. While the sheer nature of this savage crime made a compelling story, it is nearly impossible to capture the true nature of the emotional and financial devastation that barn fires bring upon a farm family. It is telling that one of the farmers who lost a barn, while interviewed by a reporter, displayed his core grief by saying, “It was pretty cruel for all that livestock.”

But for an outpouring of support from the community, and people from across the state and nation, the devastation could have been far worse. That such a tragedy was premeditated, without concern for the impact on the farms, firefighters, or animals who died in the inferno, lays the groundwork for a suspense story that wraps around the motivations of such evil.
As with the previous novel, Prometheus Scorned goes beyond the immediate response to the crisis. How does a small community of everyday people, with limited resources, lacking superheroes or black helicopters to come to their aid, cope with disruption in a tediously normal world? As an example, the availability of water to fight the fires, simplified in cities and towns with an array of hydrants, adds another layer of problems in rural areas, especially during a drought.

As a subtheme, both novels offer subtle reflections on the pitfalls of human nature, which seems to flourish at a time of crisis. Whereas tribalism is an undertone in my first book, Casting Demons Into Swine, greed sets the foundation for Prometheus Scorned. A small clue to this subtheme was given by the quote from Dante’s Inferno, an observation of the perpetual strife and toil of those souls condemned to the fourth circle of hell. Unfortunately, these burdens continue to plague us, across all societies, as they have throughout history. 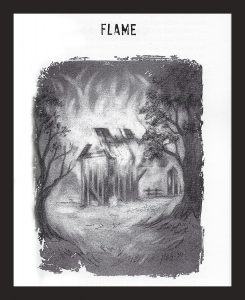