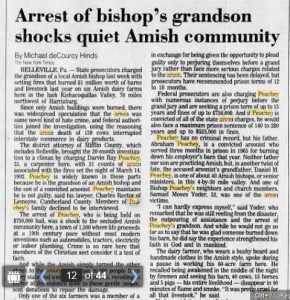 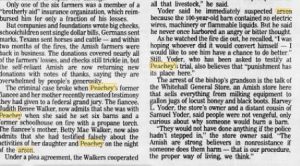 Since only Amish buildings were burned, there was widespread speculation that the arson was some novel kind of hate crime, and federal authorities joined the investigation using the reasoning that the arson death of 139 cows interrupted interstate commerce in dairy products.

The district attorney of Mifflin County, which includes Belleville, brought the 26-month investigation to a climax by charging Darvin Ray Peachey, 23, a carpenter there, with 21 counts of arson associated with the fires set the night of March 14, 1992.   Peachey is widely known in these parts because he is the grandson of an Amish bishop and the son of a convicted arsonist.   Peachy maintains he is not guilty, said his lawyer, Charles Rector of Lemoyne, Cumberland County.   Members of Peachey’s family declined to be interviewed.  The arrest of Peachey, who is being held on $175,000 bail, was a shock to the secluded Amish Community here, a town of 1, 500 where life proceeds at a 19th century pace without most modern inventions such as automobiles, tractors, electricity or indoor plumbing.  Crime is so rare here that members of the Christian sect consider it a test of faith.

And while the Amish simply turned the other cheek to the arson, more than 40,000 people from every state and some of their neighbors, recoiling in horror to the violence done to these people, sent donations to repair the damage.

Only one of the six farmers was a member of a “brotherly aid” insurance organization, which reimbursed him for only a fraction of his losses.

But companies and foundations wrote big checks, schoolchildren sent single dollar bills, Germans sent marks.   Texans sent horses and cattle -and within two months of the fires, the Amish farmers were back in business.  The donations covered nearly all of the farmers’ losses, and checks still trickle in, but self-reliant Amish are now returning new donations with notes of thanks, saying they are overwhelmed by people’s generosity.

The criminal case broke when Peachey’s former fiancée and her mother recently recanted testimony that they had given to a federal grand jury.   The fiancée, Judith Renee Walker, now admits that she was with Peachey when she said he set six barns and a former schoolhouse on fire with a propane torch.   The fiancée’s mother, Betty Mae Walker, now also admits that she had testified falsely about the activities of her daughter and Peachey on the night of the arson.

Under a plea agreement, the Walkers cooperated in exchange for being given the opportunity to plead guilty, only to perjuring themselves before a grand jury rather than face more serious charges related to the arson.  Their sentencing has been delayed, but prosecutors have recommended prison terms of 12 to 18 months.

Federal prosecutors are also charging Peachey with numerous instances of perjury before the grand jury and are seeking a prison term of up to 15 years and fines up to $750,000.  And if Peachey is convicted of all the state arson charges, he would also face a maximum prison sentence of 140 to 280 years and up to $525,000 in fines.

Peachey has no criminal record, but his father, Abraham Peachey, is a convicted arsonist who served three months in prison in 1965 for burning down his employer’s barn that year.   Neither father nor son are practicing Amish, but, in another twist of fate, the accused arsonist’s grandfather, Daniel M. Peachey, is one of about 40 Amish bishops, or senior ministers, in this 4-by-30-mile valley.   And one of Bishop Peachey’s neighbors and church members, Samuel Moses Yoder, 53, was one of the arson victims.

“I can hardly express myself,” said Yoder, who remarked that he was still reeling from the disaster, the outpouring of assistance and the arrest of Peachey’s grandson.  And while he would not go so far as to say that he was glad someone burned down his barn, he did say the experience strengthened his faith in God and in mankind.

The dairy farmer, who wears a bushy beard and handmade clothes in the Amish style, spoke during a pause in working his 60-acre farm here.  He recalled being awakened in the middle of the night by a fireman and seeing his barn, 40 cows, 15 horses, and 5 pigs – his entire livelihood – disappear in 90 minutes of flame and smoke, “It was pretty cruel for all that livestock,” he said.

Yoder said he immediately suspected arson because the 100—year-old barn contained no electric wires, machinery or flammable liquids.  But he said he never once harbored an angry or bitter thought.

As he watched the fire die out, he recalled, “I was hoping whoever did it would convert himself – I would like to see him have a chance to do better.”   Still, Yoder, who has been asked to testify at Peachey’s trial, also believes that “punishment has its place here.”

The arrest of the bishop’s grandson is the talk of the Whitehall General Store, an Amish store here that sells everything from milking equipment to gallon jugs of locust honey and black boots.  Harvey I. Yoder, the store’s owner and a distant cousin of Samuel Yoder, said people were not vengeful, only curious about why someone would burn a barn.

“They would not have done anything of the police hadn’t stepped in,” the store owner said.  “The Amish are strong believers in nonresistance.   If someone does them harm – that is our procedure, the proper way of living, we think.”